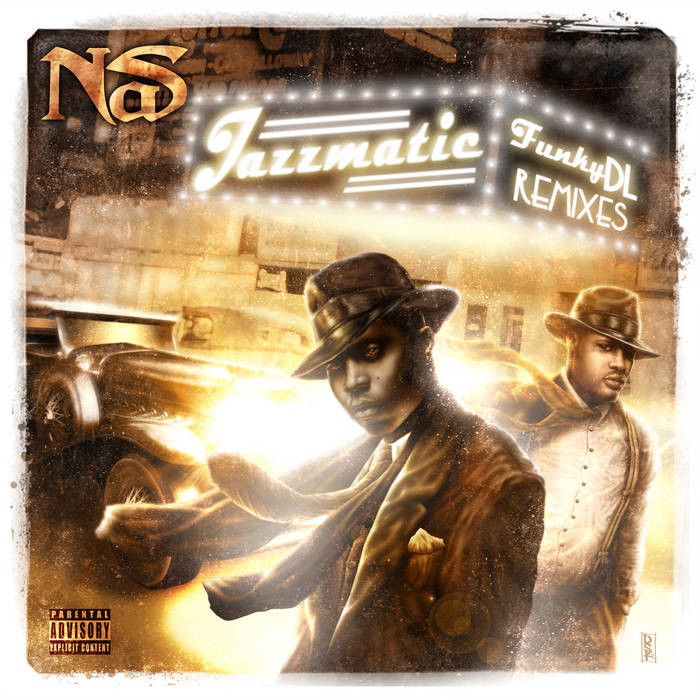 Just imagine if this happened and picture the setting…

It’s the late 1930’s and the local jazz club is packed to the brim with people awaiting the rapper Nas and his jazz musicians (orchestrated by Producer Funky DL) along with featured artists to come and play a 10-track set to forever be remembered. The lights are dim and the hall is filled with smoke, whilst the clinking sound of champagne flutes ambiently gesture in the atmosphere. Nas and Funky DL are having their picture taken outside the club in an array of spotlights glaring from their vehicles (see artwork). Then it happens… The two step inside and “JAZZMATIC” erupts … All you have to do now is… “press play”...

We’re sure you’ll agree that this is a phenomenal project and ask you to share this with as many hip-hip and good music fans as you can find.

I can remember (quite vividly) the first time I heard and saw Nas as a fresh, new and very young MC doing his thing on MC Serch’s ‘Back to the Grill Again’. I myself was a teenager, keenly glued to Yo’ MTV Raps on the regular. He struck me as the stand out MC just because of the sheer audaciousness he had when he attacked the microphone. I mean come on… “Serial killer, who works by the phone book”. I wasn’t going to forget that line in a hurry.

The next time I truly connected with Nas’ music was back in 1994 when I was over at a friend’s house and he was playing ‘Illmatic’. At that time, I didn’t know much about that album, but what did get my attention was the clarity of the mix on ‘The World is Yours’ and the beauty of the piano break Pete Rock looped so eloquently over those solid drums, with that horn striking every time the snare drum licked. That’s when I started paying real attention and went out to cop Illmatic.

I remember hearing ‘One Love’ for the first time and thinking how emotive the melody was; only to find out that one of my favourite artists (‘Q-Tip’ from ‘A Tribe Called Quest’) had configured the production.

With ‘DJ Premier’ and ‘Large Professor’ attached, this album at first was moreover about the musicality than it was about Nas, but then I started paying attention to the lyrics…and… it was curtains from therein.

From lines like “Once they caught us off-guard, the Mac-10 was in the grass and… I ran like a cheetah with thoughts of an assassin” (from ‘NY State of Mind’)… to… “The brutalizer, crew de-sizer, accelerator… the type of nigga who be pissin’ in your elevator” (from ‘Represent’), Nas had a way of saying some real grimy phrases but making them sound so cool.

It’s no secret that Nas’ descriptive from his 3rd verse on ‘One Love’ is about as best as a picture could be painted with words. So much so, that it was inspiration for the similar scene in the movie ‘Belly’, where Nas schools a young kid sitting on a Project bench about tales in the Hood.

I instantly made a connection with Nas as an artist and a writer after this point. He was someone worth listening to, always with something worthwhile to say and an interesting way to get it across.

I couldn’t honestly say that Nas was my most favourite artist and some of his post-Illmatic works didn’t entice me musically the way his debut did, but I still kept listening. Roll on the years and ‘Stillmatic’ drops. It was …FIRE!! I related to his joint ‘2ND Childhood’ in observation of some of my peers (both male and female) and their approaches to life.

Dropping just before Nas’ ‘God Son’ album, ‘The Lost Tapes” was released and my appreciation for Nas as a lyricist rose even higher. ‘Doo Rags’, ‘Blaze a 50’, ‘No Idea’s Original’ and ‘Purple’ were the stand out cuts for me.

Nas’ ‘God Son’ came next and again, I was immensely impressed with the lyricism and story telling. ‘Get Down’ was an exemplification of the unrivaled talents of Nasir Jones, whereas ‘Made You Look’ embodied the entire meaning of hip-hop to me in audio format. I remember going to a ‘De La Soul’ Show in London and ‘Maseo’ played ‘Made You Look’ at the end of De La’s set, announcing “this is the hottest hip-hop record on the radio in New York right now”. Nas was proving time and time again, he was much more than a… “more than capable” MC.

Fast forward to 2012, where I must have listened to Nas’ ‘Life is Good’ album around 30 times whilst decorating parts of my house. His writing was a huge inspiration. His way with words and his honesty as a combination killed it. It cemented in my mind that he had become my all-time favourite MC for ability with a pen. A few months of this album on repeat and the idea for ‘Jazzmatic’ hit me like a tornado. I was itching to put Nas’ vocals on a bunch of my beats and see what happened.

I didn’t want to mess with any instrumentals I already had in the vaults… instead, I wanted to craft each track around Nas’ vocals as a new venture and do my best to make it sound as if he had originally rhymed over each one. I was thinking about his mood, tone, passion and delivery. I had heard so many mash ups and weak blends online that this project had to be ‘outstanding’. I went through breaks like crazy and then enlisted the talents of fellow musician ‘Xantoné Blacq’ to do a recording session where we highlighted the breaks with Organs, Piano, Rhodes, Strings, Bass and much more… and Jazzmatic was born… a proud moment for me…

I have met a lot of (what would be considered) superstars in my time. From ‘Beyoncé’ to ‘Missy Elliot’, from ‘Will.i.am’ to ‘Eminem’… and of course Nas himself… But out of all of those artists, the only one to ever pay me a real sincere compliment on my gift in music was Nas. He heard me rhyming back in 1996 in Brixton, London up at ‘Choice FM’ on ‘DJ 279’s’ ‘Friday Nite Flava’ radio show. After I finished spittin’, Nas came over to me and said, “Did you write those rhymes yourself?”… I replied “yeah”… he then reached out to shake my hand and said… “that was dope!”… There were at least another five MC’s in the room who rhymed that night, but he singled me out and gave me my props…

Remixed by Funky DL for Washington Classics 2013.
Mixed & mastered by Funky DL at the Washington Soundlab.
Keyboards on all tracks & additional vocals on "Life's a Bitch" by Xantoné Blacq.
Featured vocals on "Rewind", "Blaze a 50", "One Love" & "Virgo" by Lei-an.
Art, design, layout & WashLogo by Sanchez at VC Design.
Funky DL Logo by Daniel Hoare.
Creative research assisted by DJ 279 for Numberman Productions.

Funky DL is regarded as one of the most legendary and significant MC's and Producers to come out of the UK. Now globally known for delivering albums with both musical and lyrical finesse...

Bandcamp Daily  your guide to the world of Bandcamp

Tropical and transportive tunes with guests Coco Maria and Anchorsong.